Merck, the pharmaceutical giant that has graced the world with its drug Vioxx, HPV (Human Papillomavirus) injections for little girls (and now boys too) and was testing their HIV vaccine on unsuspecting victims,[1] has increased their net income by 63%. Merck faced 4,200 lawsuits for Vioxx alone[2], not to mention the people whose children have been killed by Merck’s cancer-virus vaccine. 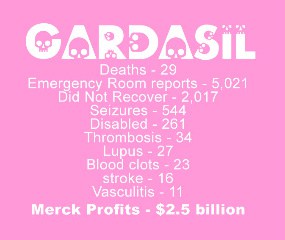 Now, Merck is under fire yet again, due to the recent admission by William Thompson, a CDC, top, senior scientist who has come forward to publicly claim that the CDC willingly and knowingly committed fraud by hiding data that reveals that Merck’s MMR (Measles Mumps Rubella) vaccine has direct connections to causing Autism in children. In fact, it was determined that male, African-American children were especially at risk, with a 340% increased chance of Autism, and the CDC committed fraud in hiding the data.[3] Thompson has also admitted that mercury (used as a vaccine additive named Thimerisol) also causes harm, particularly in pregnant women.

Thompson’s call to Congress, in which he says he has stopped lying:

So far, there have been well over 100 deaths cause by the Gardasil shot and many thousands of serious, adverse reactions have been reported, including Giuillain Barre Syndrome, a debilitating illness which affects the central nervous system.[4] Last year, Japan ended the use of Gardasil, due to over 2,000 adverse reactions reported.[5] 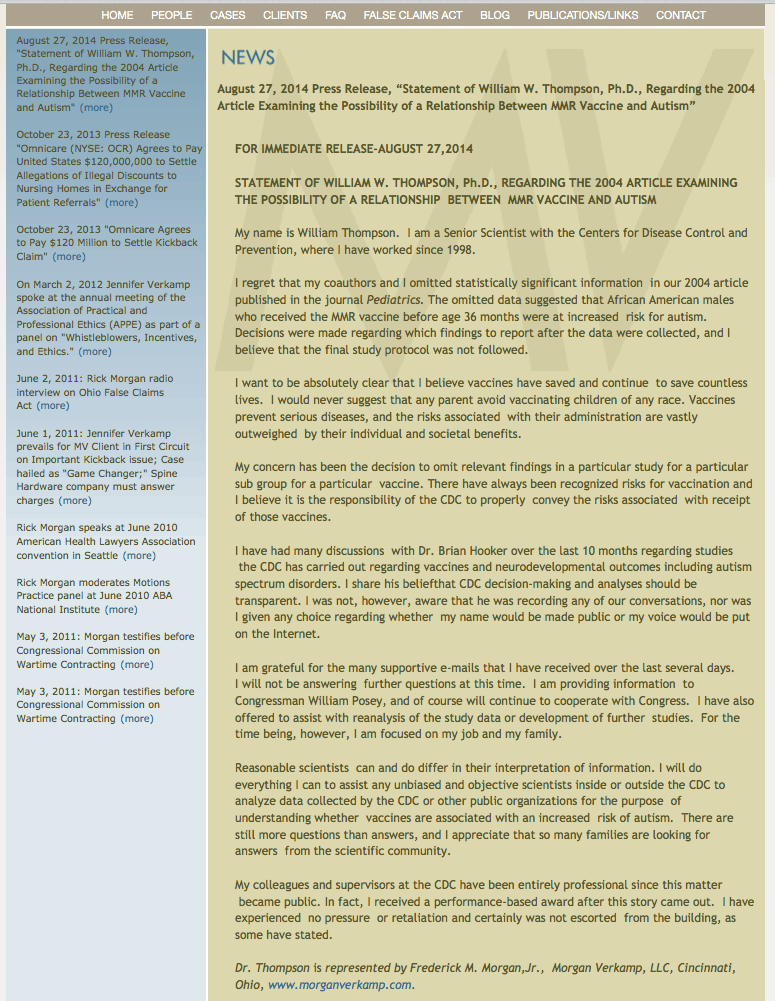 This is a prime example of how these mega-corporate conglomerates make obscene profits by poisoning and murdering people. I think they should change their spelling to M-E-R-C, because they are mercenaries against the people that ingest their poisons. People trust that the CDC and FDA will do their jobs, and not allow these harmful vaccines or other drugs onto the market. But the Consortium simply puts their place-people into positions within these regulatory agencies, to ensure that their products get pushed onto the market, and as with the HPV vaccine, there was virtually no testing involved. The young women receiving the shots now ARE the test subjects!

A case in point is the artificial sweetener called Aspartame. For 16 years, the FDA refused to allow Aspartame onto the market because it was a known carcinogen which was causing tumors and lesions in lab animals. Then, Donald Rumsfeld, who was the CEO for a company called G.D. Searle, appointed a man named Arthur Hayes to the lead position at the FDA. Hayes overturned the FDA’s ruling and got Aspartame approved for human consumption. The rest is history. Aspartame has 92 known side effects including death.[7] Yum yum, drink up 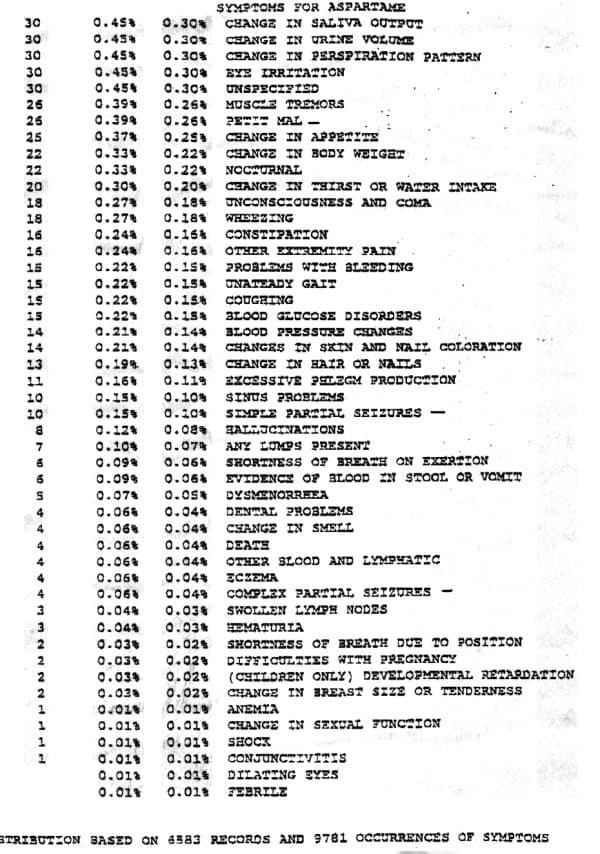 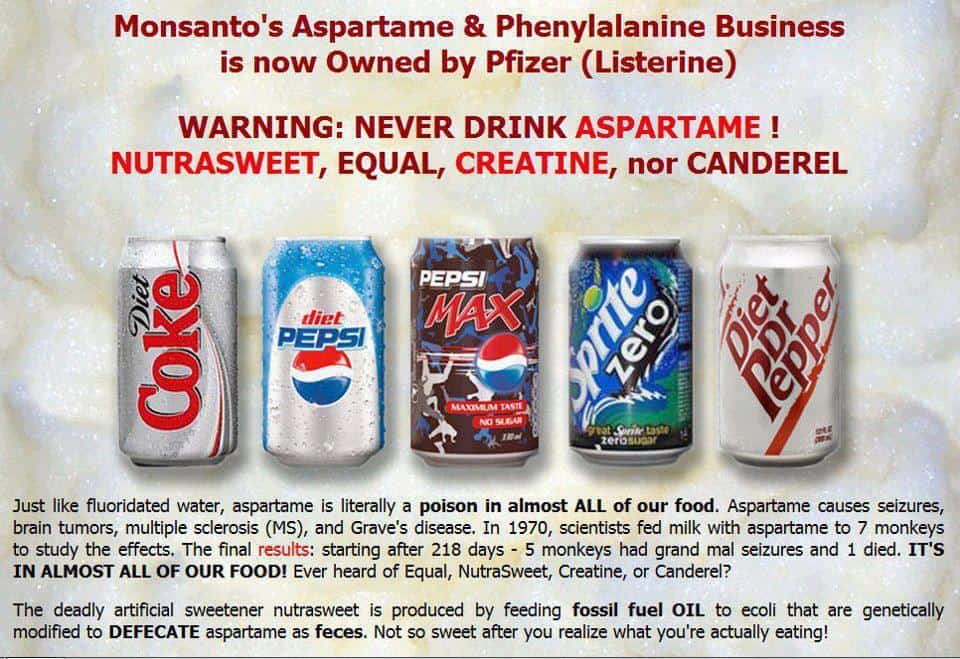 Merck pushed their HPV poison onto the market and immediately began “lobbying” or rather bribing state lawmakers to make this harmful injection mandatory. Do you think Merck wants to protect young girls, or might it have something to do with the fact that the HPV shots occur in a three shot regiment that costs around $360.00.

Texas Governor Rick Perry pushed to make the shots mandatory in Texas by signing an executive order. What a coincidence that Merck donated $5,000 to Perry, and an additional $5,000 to eight state lawmakers. Everyone has their price I suppose, and in Perry’s case, it only takes five grand to sell out the young girls of Texas. abc News even picked up on this.[8]

20 US states were/are considering making the HPV death serum shots mandatory, and I wonder if the fact that it is killing little girls will even deter the legislatures and lawmakers. No vaccines should ever be made mandatory, but nobody ever said the New World Order was going to be benevolent or sane.

The HPV vaccines have already reportedly caused damage in young girls, including autoimmune diseases. Gardasil was apparently only tested on a few hundred girls, aged 11-12. The FDA (Food and Drug Administration) mandated Merck to follow up on a sufficient number of children aged 11-12, to determine the vaccine’s safety! The study was not even completed until 2009! As of 2009, there were 15,037 officially reported, adverse reactions to the Gardasil shot, and that number has increased dramatically. What? I’ll put this as simply as possible: Merck, with the approval of the FDA and CDC, is experimenting on young girls, and lobbying state legislatures to make the experimental shots mandatory. A virus that is said to cause Cancer is injected directly into the bloodstream to prevent possible, future outbreak from a sexually transmitted disease. What ever happened to teaching children responsibility? In fact, the Gardasil shot has now killed more people than the disease it is meant to protect against! 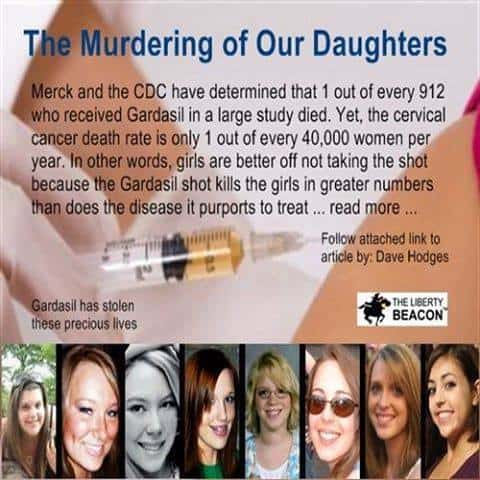 Get it? The Earth is a giant petri dish and humanity is considered nothing more than lab rats in these sick and sadistic experiments. I feel for the kids whose parents are too trusting, that just inject their kids with whatever shit they are told to and never seem to be aware of the harmful effects. If a doctor says it, then who are we to question? The entire medical establishment has become completely corrupted by the pharmaceutical industry. In fact, roughly 85% of the research that claims that vaccines are “safe and effective” is produced by the companies that manufacture the vaccines! Can you say “conflict of interest?”

Many among the awakening feel that these giant companies that push their untested drugs/vaccines onto an unsuspecting public are in it for the mega profits they rake in. That is true on one level; however, this is about much more than profit; this is about control and the engineering of human DNA.

So much of the drugs/vaccines, food additives (MSG, rGBH, Sodium Benzoate, MSG), and technology (WiFi, cell phones), interferes with human DNA functioning, and I cannot stress this enough. That is the reason they are there in the first place! In fact, recent studies have shown that young children that use cell phone technology are 5 times more likely to develop tumors.[9] Mobile phones are another product that were largely untested and pushed onto the market, and now everyone, including very young children seems to have one. Of course the unbiased research that shows how dangerous they are, is ignored, scorned or ridiculed, and the zombified masses remain asleep and in denial. How did we ever evolve this far without those little, brain tumor generators?

If the Consortium, through its mega-conglomerates can profit while they kill and control you, then that is a good business plan for them. We are literally bombarded with things that mess up the way our DNA functions, including genetically modified organisms that are polluting the entire food supply.

Despite Merck’s murdering of people, they reported in 2009 that their profits have increased by 63% by doubling its vaccine sales! Merck made $6.3 billion in the third quarter alone! The company has set aside tens of millions of dollars for the lawsuits they face, but the millions are simply a drop in the bucket for this miserable corporation. Merck faces a total of 26,000 lawsuits nationwide! As I’ve stated: I’d love to see this company sued out of existence but the mega-billions they generate off of human misery will ensure that they keep on putting their toxic shit into human beings, unless enough people wake up. Merck also produces Asthma and Diabetes medications. Millions have been paid out by Merck in class action lawsuits suing over Vioxx.[10]

Humanity is truly at a crossroads, as the Consortium is about to make their moves to establish their totalitarian dystopia. If we don’t wake up, it will simply be a constant state of misery, and I don’t want to see that happen. Humanity is already a living experiment, but what will happen if the Consortium openly establishes its one-world government? Unfortunately, we are dangerously close to that happening. Companies like Merck are pushing these DNA-interfering products on behalf of the Consortium which controls them. Vaccines in third world countries have been shown to contain sterilization agents, and agencies such as UNICEF have been injecting these poisons into people en’ masse. Is it possible that vaccines in this country also contain sterilization agents? Why are such a high percentage of Native American women now sterile? It’s just a coincidence, no doubt.[11]

It is time to really start paying attention in this apocalyptic, age of revealing. Humanity is at a critical juncture, and the Consortium is feverishly trying to prevent something from happening. What that is, is anyone’s guess, but I think that maybe humanity is on the cusp of a massive evolutionary change that involves DNA mutations, and perhaps a transcending of human consciousness. The power truly does lie within us, if only enough people wake up to their own inner power and stand within the light of their own magnificence.