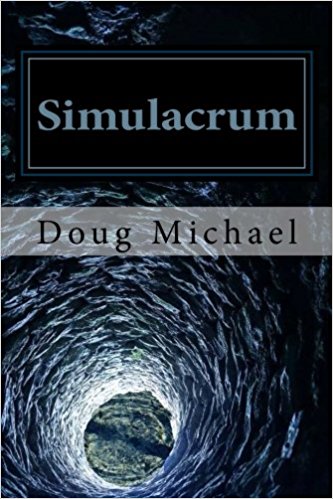 We are born into an artificial, overlaid superimposed reality, an illusory, psychological prison, a simulacrum.

Our entire lives are guided by unseen forces which through perceptual conditioning and the manipulation of human consciousness, have erected a control paradigm that enslaves the mind from cradle to grave. This book examines aspects of this manipulation and offers ideas as to how one may achieve cognitive freedom and transcendence of the control structure.

Humanity currently faces a crucial turning point, a critical juncture in its Earthly Sojourn. The fork in the road has been reached and the decision must be made as to where we are going as a species. Will humanity choose the road of unity and come together as a family, despite their differences or will they walk the road that leads to extinction? The choice is an individual one. 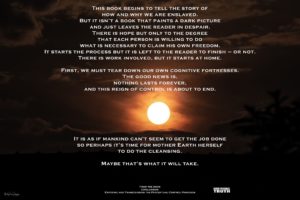 Faraway: The author takes the reader through a journey pointing out how blind, ignorant and manipulated we have become as people. The author points to our grandiose ego which willingly feeds into “simulacrum” that plays a role that moulds and controls us and distracts us from thinking and seeing the true reality. We have bought into a false reality and have become enablers of this false reality because of overwhelming control and power of consortiums of mass manipulation. The solution is to take back our awareness and consciousness. We need to see the through new lenses, based on informed criteria that constantly assesses our reality. The author points to the extent of the spread of distortion, it is everywhere. This is a good read if you are ready to acknowledge the BS that surrounds us and controls us at every turn.

Eva McQuillan: Beautifully written, unquestionable references, cognitive evaluation of false believes, theology, philosophies, science, and mass propaganda of fear, forced upon world and humanity for edges, and New World Order. Doug delivers clear, objective evaluation of inhuman conditions of daily living, imposed on by ruling class. His concept of peaceful revolution, as evolution of individual mind, and noncompliance with oppression is our only hope. As I call it-generation of silicon minds, hearts, gods-we are only saviors, in mental transmutation. And time is now. Call the book, book of the year, sending it as a gift to friends around the world. Thank you, Doug, it is privilege to know you, as friend and mentor.

Mike: With more and more talk of the coming technological singularity and what the future holds for mankind, Doug Michael’s book, Simulacrum, took me down a rabbit hole of astonishing revelations about the current status of mankind. I got much more than I expected when I took up this modern retelling of Plato’s Allegory of the Cave. Virtually every paragraph in this fast paced book is an informed and compelling piece of a larger puzzle that doesn’t just shake up that status quo – it turns the status quo upside down and inside out. While most people would probably agree that humanity and the culture it is nested in are about to go through some huge changes – and there is a lot out there on this topic alone – Michael has taken the road less traveled in this book as he takes an inventory of our collective psyche and finds it wanting. Our species-wide trauma serves only to blind us to the disempowering manipulations of our leaders that he calls the Consortium. And even if his book takes some dark turns as Michael doesn’t reassure us with visions of magical unicorns and elves leading us to a brighter future, he doesn’t leave the reader entirely without hope. Simulacrum is much more than a revelation about the sinister dark corners of our society – it is ultimately a call to action. While the odds may seem to be stacked against our spiritual redemption as a people, Michael shows us that we are not without options and what those options are.

Kaume: You think when you come into life on Planet Earth it’s pretty straight forward. You go to school, get an education and then set out to make your mark upon the world. You expect that when the time comes, you’ll retire and spend your remaining years watching your grandchildren grow up and eventually make their mark. Right? Well, that’s not always the way it happens because somewhere between birth and death, you will discover that a whole lot of other people have some very different ideas about it and what’s supposed to happen to YOU. This is a book about THAT, and the sooner you pick up a copy and start reading, the better prepared you will be the deal with it. The isn’t an end, but it may very well be a beginning.

Amazon customer: This beautiful planet and its inhabitants are being figuratively shat upon from a great height yet most people are totally unaware of this fact. Doug Michael has an excellent and informative website: ‘Doug Michael Truth’ through which he has been informing people of the truth of what’s really going for many years. He’s never monetised the time and effort of doing this but, with evident humility and integrity, has offered everything freely … as those of us who’ve followed his work have witnessed. He’s now written this superb book ‘Simulacrum’ in which he’s collated and presented a wealth of information… and wisdom. He’s used just the right amount of words, not too many and not too few and for me, the best way I can describe reading it was a feeling of ‘coming home’, odd as that might seem, even to me. However, that’s how I felt as I read it. For either those who’ve long been on the tortuous path of seeking the hidden truth or those who are new to such things, this is an excellent resource. Actually, in spite of the challenging nature of some of the information, I found the book easy to read and assimilate and I loved the last chapter so much, I read it to my daughter and my friend down the phone. I really can’t recommend ‘Simulacrum’ highly enough. I consider it vital that people become aware of its contents because we simply can’t afford to live in ignorance any longer. At this point, time is not on our side. I just want to say, in case he ever reads this, ”Heartfelt thanks Doug Michael… I appreciate your work so very, very much”.

Katie: If you feel like there’s something not quite right in this world then you are a part of a growing number of people that feel as you. The author describes this as an imbalance between the physical and the psyche. Doug draws back the veils of the control paradigm that keeps us imbalanced and bound in our cognitive fortresses. This book has a powerful message that everyone should read. 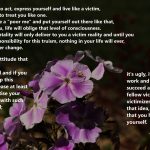